Head of Marketing at @Venngage and Creator of drinkwithnadya.com. Speaker. Feminist. As seen on @HuffingtonPost @Entrepreneur @TheNextWeb @Forbes 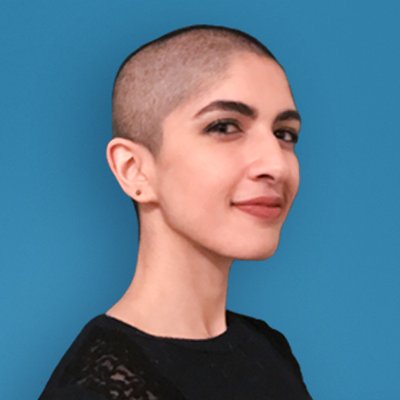 Nadya Khoja's educational background is in theatre, not marketing.

Her program was in Devised Theatre - a type of collaborative improvisational performance - and her direction was to make a show and tell a great story from the ground up.

Having too much creative freedom can be stunting, so Khoja and her team focused their brainstorming rehearsal sessions to what they weren't allowed to do. By setting limitations for themselves, they were free to make more creative, engaging, and viral performances.

Nadya Khoja uses this same skillset in her role as head of marketing for Venngage - a SaaS company with tools to create infographics. In 3 years, she's helped grow Venngage from acquiring 400 users/day and $8k MRR to 5,000 users/day and $350k MRR with no advertising budget.

Venngage attributes this growth to organic traffic from their content marketing campaigns.

Viral content is information that is circulated rapidly and widely from one web user to another, akin to how a virus spreads between biological hosts.

Traditionally, marketing content is created by coming up with a list of topics, dumping them into a spreadsheet, coming up with article titles for each topic, then picking the most clickbaity-sounding title to publish.

This may seem like a productive process, but it's a recipe for a large quantity of content. You won't get highly engaging content that excites and engages users virally without a more refined process.

The Content Market Institute's 2016 Benchmarks, Budgets, and Trends Report was linked to over 7,000 times, often by high-profile websites like Forbes and HubSpot.

Why was this content so popular? Because it answered a burning problem every content marketer has on their minds: how does my content compare to the industry standard?

Solving burning problems is also why reddit ask-me-anything posts (AMA) are consistently popular: they give people outlets to ask successful people for advice to help solve their problems.

What problems is your audience facing? If you don't know, you can ask! Even if you only have ten users, try emailing them asking what they're struggling with.

Once you know what questions your audience has, make content that answers their questions.

What makes "The Magic Art of Tidying Up" better than other guides to house cleaning? The solution is framed as a magical solution: for each thing you own, hold it in your hands and ask "does this spark joy?" That's a way simpler and easier to remember solution to the problem of having a messy house than a more traditional solution like "get rid of anything you haven't used in 6 months."

DIY YouTube videos like How to Fold a shirt in under 2 seconds are successful for a similar reason. Folding shirts is a problem people are familiar with, and even though it isn't that complicated or time consuming to fold a shirt, the video shows a magical way of doing it.

Once you know the problems your audience has, try creating content offering simplified magical solutions for them. What's the "one crazy hack" they could do to alleviate their burning problems?

What tasks is your audience doing on a daily basis, and how could you give them a hack to their common struggle?

Venngage's myth-busting article Millennials Don't Suck, You're Just Old and Hate Change post has performed very well, and got picked up by The Next Web. Venngage now ranks long-tail on the search query "old people suck."

Content that disproves common knowledge theories encourages debate and conversation, which gets your content shared much more. You'll also increase the value of your brand with people who agree with you.

Gary Vaynerchuk in his viral article Superbowl ads aren't expensive enough challenges the idea that Superbowl ads, which cost an average of $5M ($170k/second) in 2016, are too expensive. His reasoning is that the superbowl is the one time of the year when people are excited to watch the ads, and the cost of a superbowl ad isn't that much more than non-superbowl ads.

Similarly, Venngage's post We Looked At 137,052 Tweets & Found Out Hashtags Are Worthless challenges the idea that hashtags are useful.

Like busting a myth, challenging the status quo generates conversation. Naturally, if you've held an idea for your entire career and someone writes an article that says your belief is wrong, you'll get upset and engage.

The Bill and Melinda Gates Foundation published a viral piece of content on The World's deadliest animals, which shows mosquitos as several orders of magnitude more deadly than sharks, wolves, lions, elephants, hippos, and crocodiles.

The core question the foundation is trying to answer is why you should care about the malaria vaccination. By coming at that question from a novel angle, they made content that's much more surprising, memorable, and sticky.

Nadya Khoja used this tactic to answer the question "who should you invite to be a speaker at your conference" ("me!") by writing a viral piece analyzing conference diversity: Women Still Not Welcome: The Ongoing Issue With MarTech Conferences.

6. Bring in a New Perspective

Everyone talks about Stephen Curry's percentage of shots taken, performance, and 3-point game. Content that discusses these topics is plentiful, reasonably popular, and boring.

Move away from the expected perspective and look at the question through a different lens. Unlike reframing the question, you'll still be addressing the same question, but with a new layer of analysis.

This is Khoja's favorite principle to use because it's easy and fun to do.

Combine two seemingly unrelated topics and find a common element that connects them. This is a great way to combine trending themes with evergreen themes.

For example, what design trends can be learned from Star Wars?

By mashing up your company's topics with trending fads, your content is able to attract a much wider audience.

8. Go outside of your immediate field

HubSpot is a customer relationship management (CRM) tool, though their content focus is in the much wider space of digital marketing and sales. They produce content on search engine optimization (SEO), entrepreneurship, advertising, content marketing, and other marketing knowledge.

Because of their broad focus, HubSpot has established themselves as the go-to authority for everything marketing related. When customers interested in any of these topics are looking for a CRM, they have established brand awareness and trust with HubSpot.

People tend to become very obsessive about their subcultures.

Fans of Game of Thrones (GoT) form a cult-like subculture that love culture-aware content like Venngage's viral Game of Thrones Web of Betrayals. That particular piece of content was so popular with GoT fans, it crashed Venngage's site after being shared by George Takei.

Similarly, Ru Paul's Drag Race sub-reddit quickly grew to be more more popular than the more general marketing sub-reddit because of how much more engaged that TV show's subculture is.

For every topic, there is always an origin story of how that thing came to be. To generate origin story content ideas, think about how founders, companies, or industries got their start and tell their story.

11. Envision the Before and After State

People don't buy products or services. They buy outcomes. They buy access to the "after" state that a product can give them. Great marketing, therefore, is explicit about exactly how a customer's life will be made better: what they'll have, how they'll feel, what an average day will be like, and what their status will be.

With each of these attributes explicitly defined in the before and after state of a customer, any half-decent copywriter will be able to create an impactful marketing message:

When creating content, explicitly define before and after states of a customer using your product for each of "have," "feel," "average day," and "status."

For more on expressing before and after states, check out Customer Value Optimization by Digital Marketer.

Trump tweets are consistently viral because people care (strongly positively or strongly negatively) about what he says. They speak, write and act in response to that strong emotion. In order to have their passionate loving or hating voices heard, they engage with Trump's tweets in a way that expresses how they feel.

foundr (an entrepreneur magazine) sells a course on how to grow an audience on instagram. Instead of writing content directly about this course (which isn't easy to emotionally engage with), they publish inspiring and engaging success stories of people who have finished the course, which get re-shared by new people who complete the course.

Has there ever been a pushback from JK Rowling or Star Wars for mashing up their content?

We've never had any issues. They're too big to care. The only time big brands might care is if you're using them in advertising.

Have you created content around a very technical topic?

Wouldn't mashups bring in a lot of random traffic?

Increased general traffic might not convert well, but increased brand awareness helps your google rank and future conversions. We saw an uptick in the site overall.

We focus most of our time on brainstorming, then 20% of our time putting the ideas together.

If we see a trend in the market - like Game of Thrones being popular - we focus on what we could do in that trend to get traction.